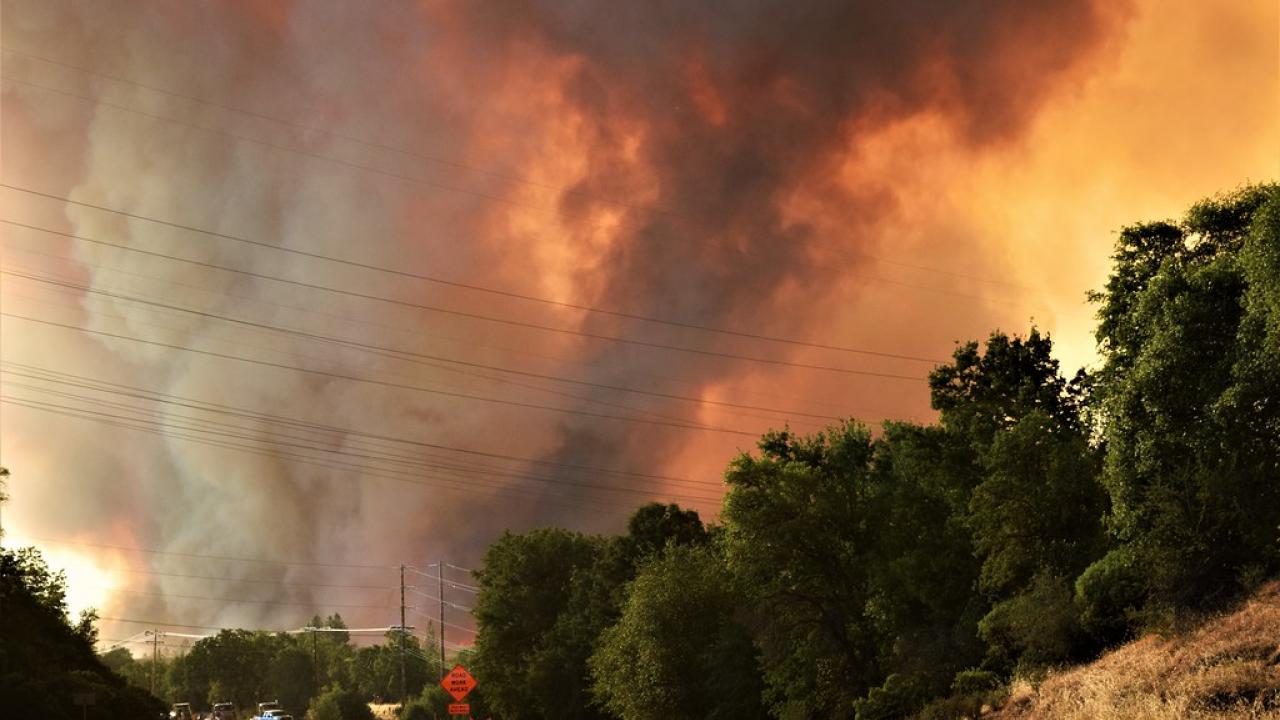 One of the rising causes of air pollution in California are wildfires alongside transportation and landfills. As staff writer for the LA Times, Tony Barboza, comments, a report published by Next 10 "describes a vicious circle in which air pollution from fires, growing more intense and destructive with the warming climate, threatens to undermine the state’s progress in reducing greenhouse gas emissions." According to the report, the progress California made towards meeting it's 2020 target in cutting carbon pollution was undercut by the wildfire emissions of 2018 as seen in the graphic below.

However, while recent wildfires have been catastrophic for many reasons, the release of carbon from them is considered to be a "modern carbon" that, as burned lands regrow, will be reabsorbed from the atmosphere. Michael Kleeman, a professor of civil and environmental engineering at UC Davis, noted that while it is understandable to measure wildfire emissions and compare them to the regulated sector's emissions to help create a better understanding of the numbers, he "wouldn’t use that comparison to conclude that the state reduction efforts have no value."

"The carbon stored in wildfires is part of the natural carbon cycle; emissions from fossil fuels are the result of pulling carbon out of the grown that otherwise would not be there, and pumping it into the atmosphere," stated a California Air Resources Board (CARB) spokesperson, Stanley Young. Young, along with other researchers agree that emissions from wildfires should be monitored separately from other sources.

The California Green Innovation Index tracks our environmental progress based on the CARB's annual inventory. While emissions have declined, the Index shows that reductions have slowed and at the current rate, California will not meet its goal of cutting greenhouse gases by 40% below 1990 levels by 2030.

The California Air Resources Board put forth a blueprint in 2017 that offered a fiscally-responsible and technologically-feasible road-map  to reach the 2030 goals.

Barboza reminds us that "though California is the world’s fifth-largest economy, it ranks as the 19th-biggest polluter globally, emitting more greenhouse gas emissions than France or Thailand but less than Australia, Mexico and the United Kingdom, according to the report."

As Research Director at Beacon Economics, Adam Fowler, said, "Every choice we make about how to use our land, power our buildings and travel makes a difference. We’re slowly changing an entire economy away from that fossil fuel backbone, and it takes a lot of people rowing in the same direction.”

Learn more about smoke from wildfires and the effects on our air quality at the International Smoke Symposium in Spring 2020. Visit the event website for details on topics.